Afternoon, 1400 hours, everyone inside Bait Muscat was running hither and thither. “Take your gaugles, caps or hats and other heat resistant stuffs, we’ll sojourn the vast desert today”, second banana, Urmila mausi announced. Everyone got assembled in Guddu’s room to say a small invocation and after getting spiritually recharged we were all equipped to sojourn the land golden sand dunes. 1000 Nights Camp was verbally booked for 190 Rials for eight elder people including me and Bunty. Yukon, a 6.2 cc  monstrous car and Envoy was at are service. Pratap mausaji, the nucleus with his spouse, their children, Ashie, Anshu, Bunty and me captured Yukon for our journey, while the remaining, including Ambu, again making our group, a bakers dozen preferred Envoy. After covering a distance of  200 Km. we reached Bidiya and at Bidiya petrol pump, we satisfied our respective bellies by taking lunch. 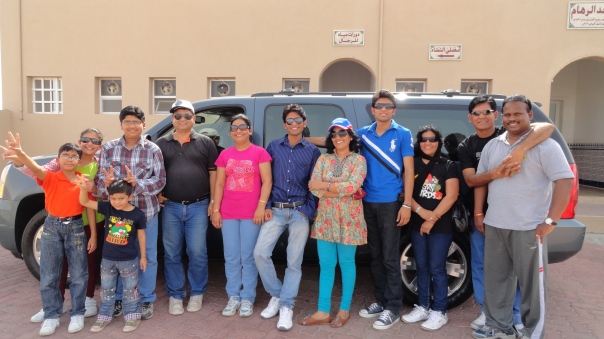 Picture clicked after having lunch @ Bidiya Petrol pump with Yukon car & and person who is missing captured it. Can you guess who clicked it?

The surface area between the tyres and the desert sand was augmented by abating the air pressure from the tyres of both cars. Soon we began to sail in the desert sand tides. It was really an indelible drive for, my eyes explored the hot desert sun but my body was experiencing the cold of AC, as is was in Yukon 🙂 My brother and I kept our cameras on video mode to jail the journey. With the help of a map, which we downloaded from 1000 nights camp website, we finally reached the spot. Traditional kawa, coffee and dates were served to us by 1000 Nights people. Happiness were to be seen on our faces. We were as excited as if a financial bill before the legislative assembly in New Delhi 🙂 And my post of desert will be incomplete if I do not mention the ship of the desert, we saw camels chewing and preferred to have pics with them. Urmila mausi, Tunnu, Guddu, Anshu and I went far inside the camp to explore. But it really saddens me, when we came, we heard a verbal skirmish between 1000 Nights’s people and Pratap Mausa. Actually, they cheated us 😦 Despite of proper verbal communication and booking they made no systematized arrangements and moreover they demanded extra Rials for sand bashing and many other desert activities, which they initially approved within 190 OMR !!! As far as the power of my sub conscious mind is considered, I remember that person was charging 25 OMR for sand bashing per person or per 4 members 😦 Pratap Mausaji, my father, Anand Mausaji and Ambu were skirmishing with that bastard wretched idiotic character but he was rigid to loot us. “190 Rials for only dinner and one night accommodation”, Urmila Mausi scolded. While skirmishing was on zenith my mind said,”a bit of India in Oman” personally to me. At that time, Urmila Mausi’s perspicaciousness was highly extolled by all other family members. She said directly to that imbecile, “adjust all in 190 Rials or we’ll abscond”. I crawled towards Manju Mausi and whispered in her ears, “have we paid the currency to this bastard ? “. To my amelioration, she said, ‘NO”. I sighed. We were 200 Kms. away from Muscat and won’t return, keeping this is his mind he did not gave up the loot endeavour. But thankx to sagacious Urmila Mausi for her sagacious and instant verdict, we began our departure. Interestingly, that spineless worm followed us and while jotting the number of our cars said that we had done wrong to him. Now, I’m damn agitated to curse 1000 Nights Camp more….so If you are planning to visit the camp do learn lesson from our visit 😦 I’m not saying that that camp was zilch but would like to add that the place was perfect to enjoy the desert life but the management was pathetic. We, without hesitatingly activated our journey again. I kept looking 1000 Nights camp and within seconds it melted in darkness, dust and heat. Sitting inside the Yukon, we took turns to criticize him 🙂 Bunty said, “chalo kum se kum kawa, coffee aur dates to free mei mil gaye” 🙂 “Bhai, free nahi petrol to laga hai apna”, Pratap Mausaji retorted. 🙂 Envoy and Yukon were freezed for sometime so that we capture images with the vast desert and sun. 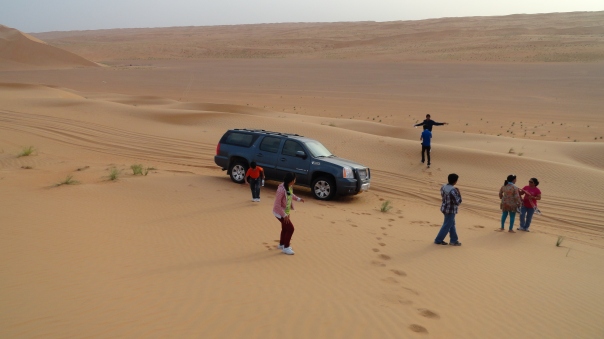 Freezed Yukon :)The gargantuan Monstrous Yukon on golden sand dunes of the vast and endless desert. I, Harshit Chauhan (in bark blue shirt, expanding my arms). 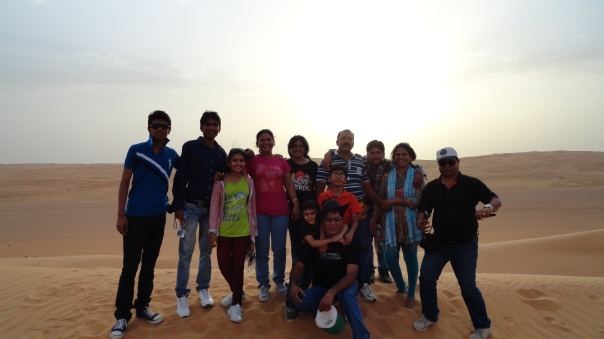 The sun began his departure and now it was again our turn to again make a sagacious verdict. Returning 200 Kms., without visiting zilch would become abominable and it was then decided that we’ll stay in a hotel tonight and in the morning we’ll explore turtle beach in Sur. We took a break to have shawarma(s) and finally marched to Sur, 70 Kms. from Bidiya. It took some time to find a good accommodation but our patience was rewarded in form of a good hotel. And after bargaining, we hired an apartment with two big rooms, two bathrooms and one kitchen for 28 OMR. I forgot the title of the hotel, so can’t mention it 😦 While taking dinner, it was proclaimed that we all have to leave the room early morning  by 0200 hours as entry for turtle beach will close vaguely by 0400 hours. And that was the end. “One thing is impeccable, the coming 24 hours will be adventurous”, my mind commented to me, personally.