A Tiger For Malgudi – R.K Narayan 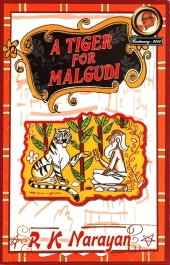 “A Tiger for Malgudi”, is a story of a tiger who dwells in a wild jungle of South India. One day he discovers that hunters have killed his entire family and in order to take revenge he attacks the goats and livestock of the nearby hamlet but ironically he gets captured by a circus owner. The trainer, known as “Captian” in the book teaches him tricks to impress general public. The Captain starves him and forces him do learn the tricks. But one day his anger gain supremacy over his hunger and he eventually kills the Captain. Later a drastic change take place in him and he passes the rest of his life with a monk guru.

The story was good but is was the narration by R.K Narayan that I admire the most. What all I can conclude is that the book is good but if you are reading R.K. Narayan for the first time then I”ll suggest you to read “Swami and Friends” or “The Bachelor Of Arts” or “Malgudi Days” as I think them far better than this one. Over all the book is good, I recommend and rate it 3/5.