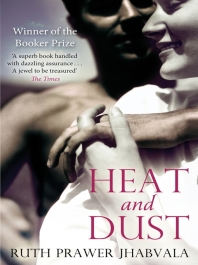 Heat and Dust is one of the best attempts of Ruth Prawer Jhabvala at English Literature. The content of the story is very limited but compellingly, two stories shows parallelism in the entire book. The story’s inception is when Olivia, newly married to Douglas, who is describes as a civil servant abscond England for India in 1923. Olivia there comes in contact with the Nawab at a dinner party and later she elopes with the Indian Prince ie. Nawab. Douglas gets married to Tessie and they become the grandparents of the first-person narrator in the story. Fifty years later, the narrator decides to land India to solve the puzzlement of Oliva’s elopement. Ruth Prawer Jhabvala wrote two stories simultaneously with splendid akiness between them though the time of both stories are different.

Rest of the book is fine and yes, I won’t expose the thrill by writing more. All I’ll do is provide you some more detail of the book so you can develop an inclination towards it. The summary of the story which the original book has: “to a civil servant, outrages society in the tiny, suffocating town of Satipur by eloping with an Indian Prince. Fifty years later, her step granddaughter goes back to the heat, the dust and the squalor of the bazaars to solve the enigma of Olivia’s scandal.”

Promulgated in 1975, the book won the prestigious Man Booker Prize in the very same year. The story in so intriguing that a drama film has been made with the screen play by the author herself. I completed the book in two days and both the story and narration is the Jewel of this book. Later, I came to know that the author is the only person in the world who has won an oscar and a Booker Prize. So, what an intellectual personality she was. I don’t think anybody reading this would like to dodge reading Heat and dust.